Why disbanding IZONE & X1 gives birth to a new set of problems, not a solution 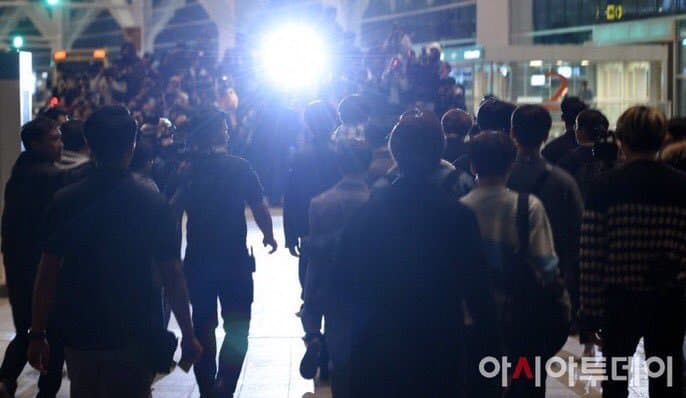 Disclaimer: photo is owned by Asia Today. This site is not affliated with Asia Today.

We have been lurking and asking friends to translate a lot of the tweets from different languages for me. This made me realize a number of fans seem to think that disbanding the groups is doing them a favor and an opportunity to start fresh – which was also the stance taken by the fan group which released their statement earlier this week. We realized so many of them have such shortsighted perspective of the issue and seem to only think about the immediate outcome of this situation, not how this will effect all involved parties in the long-term.

1. Breaking the groups or removing members will just create a new set of victims.

Based on their mentions during the KPOP FESTA, the boys are fighting to stay together onstage as X1. That alone should be the signal for their own fans to grant their wishes, so it is painful to see that some of their own Korean fans are pushing for the reshuffle/adjusting the line up. Have they ever thought about how this would affect BOTH the members who leave and the members who get to stay? We know they are pushing for this in an attempt to ‘save’ their own bias, not realizing how it is going to affect both parties in the long run. Removing members would imply that boys themselves are the ones guilty and not victims pushing the ‘you may not have known what’s going on but you still benefited so you’re at fault too’ narrative. The members that will be forced removed very well may have to quit the industry altogether because that is a stigma hard to recover from unless they completely overhaul their own identity and the members who get to stay will certainly be emotionally and mentally affected by something so drastic. Imagine the trauma and burden all of the members have to go through. Furthermore, the thousands/millions of fans can be considered as victims as well. Considering the effort and time they have spent for the group to take flight and be known. These fans have been extending themselves to support these 11 boys, disbanding them will surely affect them emotionally and mentally. To add up, a lot of fans have been spending their personal money since day 1, dissolving/changing the line up will surely ignite hate and protests from them.

2. This is a problem the groups and the members need to overcome.

In the event that alleged “rigged members” are pulled out or the group is disbanded, what does that solve? Starting fresh for everyone? No. The stigma doesn’t die. Just because you put a band aid over the wound doesn’t hide the fact that you are injured, as a matter of fact it even brings attention to the injury. Sure, you might have thought that you’ve run away from the problem but it will always be there. Putting on a band aid isn’t enough to treat it, you need to deal with it straightforwardly. This isn’t a regular idol group popularity problem, where everything seems to be solved by disbandment. They will be forced reshuffled/disbanded – we don’t think ANY idol groups had to go through something like that PUBLICLY. That method is hugely demoralizing, traumatizing and may cause forever damage to the members’ lives, possibly in various facets of their lives. The best way to make them overcome it is to allow them to deal with the problem head-on, rather than putting them in a helpless situation where they are made to feel like objects that people can form and disband at will. The fact that they were caught in this controversy despite being innocent is already unjust in itself, we are sure they are feeling a lot of helplessness already. It is still impressive to see X1 members not hiding and trying to face the issues – showing their face in public, signing their names with “x1” and interacting with fans outside can be seen as their attempts to communicate their willingness to continue promotions as X1 despite the scandal and the social media ban by their company. The least fans could do is to stand by their side and help them tackle & overcome this issue directly.

3. Public image is ALWAYS recoverable with a competent PR team.

Especially since NONE of the idols in question are at fault. Actual criminals and people linked to greater controversies have managed to bounce back and return to the entertainment industry, in Korea and abroad. These kids aren’t hopeless with the right PR strategy, especially since it is the truth that they are not responsible for the scandal but were only pawns. It is almost a shame that it seems like none of their companies are trying to push this narrative (which is actually the TRUTH) even if a lot of Korean netizens are somehow getting it. It hurts witnessing that it is actually some of the fans who are calling for the disbandment/reshuffle of members, not knowing that by doing so, they are affirming the stigma on their own biases (who they believe are not part of the rigged line up, hence deserve their X1 spot). Leaving X1 or kicking others out of X1 is not the solution. We need to remember that fans holds the power in this situation, and any decision about d*sbanding or changing the lineup will directly affect the group’s dynamics in the future. Fans need to be loud about OT11 or not, and keep directing the conversations online to demonstrate support the boys and emphasize they were victims too.

4. This is an opportunity to call out the Korean media industry for not using logic in dealing with the situation.

It is obvious that a lot of people in the industry support X1 and IZONE, but there are these entities – the ones headed by supposedly responsible adults who don’t understand that the fans can think more critically and logically– whose belief is that they’ll also took the damage if they affiliate themselves with these kids, are the ones making this decision. Putting pressure on the innocent kids, instead of helping their voices reach the world, is something worth criticizing when it is most likely these adults who are unaware of what really is the issue, not knowing who really are to be blamed. They just don’t want to get involved, turning their backs while cowardly shutting the innocent members out. The fact that Korean media entities refuse to use their common sense in determining who are the REAL culprits and the REAL victims is something worth calling out. A lot of people are missing this chance to do so, because they are more worried about themselves. This sets a bad precedent where, if even popular idol groups like X1 and IZ*ONE are ultimately easy to sacrifice, then companies will find it easier to throw groups away in the sight of the smallest scandal. Companies with nothing but bad intentions will find it easier to trash groups or idols who are of no use or who may harm their reputations, instead of protecting and helping them out.

If disbandment isn’t the solution, what is?

Now, with the current news of CJ ENM being announced as victims of this controversy as well, the whole issue had taken another standstill. CJ ENM has taken their stand that they were also victims, with no acknowledgment or whatsoever to the actual victims of the show: the trainees, and the viewers.

However, being a strong conglomerate like CJ ENM, regardless if they really are victims or not in this whole charade, we all believe that they still hold the most power among all the victims. The only thing they’d be losing will be their reputation and probably a few deals. Those things, however, can be acquired again in the future.

If they really are serious with this matter, they could become the benevolent one. If we all think about it properly, CJ ENM has the biggest power to return X1 to their glory. For X1, including the rest of the trainees who joined the show, they knew nothing of this. They were merely puppets who got played by the evildoers AJY and KBY.

CJ ENM is holding the card now. They can be the hero, finally clearing X1 from this mess. They could also be the villain, who throws away the puppets, because they were only tricked into debuting, promoting, and managing the groups.

However, going back to our main point: disbandment is not the solution.

So we strongly call CJ ENM’s attention, to finally put things back to where it should be. To finally protect the artists and be responsible for them. CJ ENM has nothing to lose in saving X1. After all, they would benefit from it the most.

Connect with
I allow to create an account
When you login first time using a Social Login button, we collect your account public profile information shared by Social Login provider, based on your privacy settings. We also get your email address to automatically create an account for you in our website. Once your account is created, you'll be logged-in to this account.
DisagreeAgree
88
0
0
13

smoke shops near me